Giorgio's Still Got It!

February 20, 2008
We went out for our “Valentines dinner” this past Sunday. We always celebrate a day or two later. I hate going out on the day itself. I feel like it’s very hard to get a true representation of a place on such a crazy restaurant day.

This year we didn’t even try something new. We wanted to stay around our neighborhood so we decided to go to Giorgio’s of Gramercy. We used to frequent this place quite a lot but hadn’t been in at least a year. We started the night out first though with drinks at Gramercy Tavern.

We grabbed the last two seats at the bar and each had a lovely glass of Tocai from the Channing Daughters to start. Gramercy is such a wonderful place to relax and after our glass of wine we decide to stay for one more drink since we just enjoy the surroundings so much.

This time we went for one of our favorite beers the Saison DuPont. Between the wonderful selection of beer and wine, great smelling food and lovely ambiance it was hard to tear ourselves away from Gramercy Tavern. We contemplated staying for dinner but then decided to keep on with our original plan. 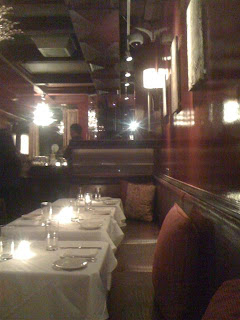 We walked over the block to Giorgio’s and the first thing I noticed was the walls. They redid the place since the last time we were there and the white walls had been replaced by a bright bold red. The effect was stunning. My elegant little place now seemed sexy! I really liked it. And although I love Gramercy Tavern I was looking for more of this kind of quiet, gentler atmosphere. 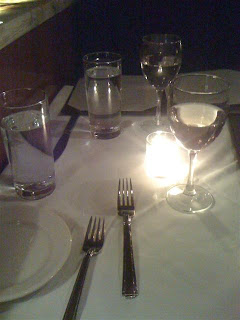 We sat down and ordered a bottle of Sancerre to begin. On Sunday's every bottle of wine is $15 off. It's a pretty good deal...Come to think of it I think we almost always come to Giorgio's on Sundays!

As we were looking over the menu they brought out an amuse bouche. 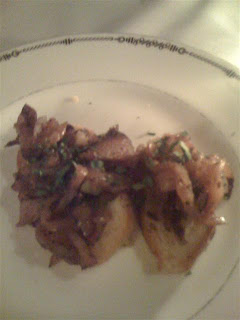 This was a Pastrami Cured Crostini. This was okay- I’ve never been that big a fan of Pastrami but a little nibble like this once in a while is nice.

We placed our order and they brought over some crusty bread with a nice olive oil for dipping. 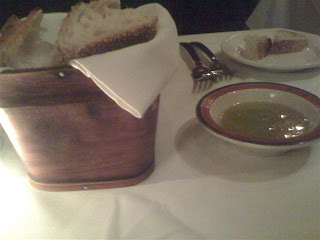 Now I should point out that when we walked into the place around 6:30 it was pretty empty. Over the course of the next half hour or so it became packed with a large party taking up the entire back and several couples up front by us. I think this caused a little bit of panic because our waitress was running around and it was quite a while before our appetizers arrived.

Luckily neither of us was starving so we didn’t mind too much but I was kind of relieved when they finally got to our table.

We decided to get two appetizers we could both share because…well sharing is kind of romantic, yes?

First up were half a dozen oysters. 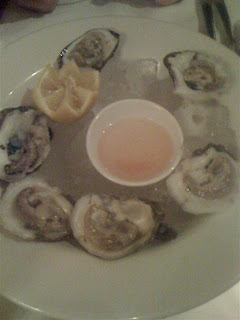 Now we are just getting more into oysters so forgive me if I’m not exactly positive but I think she said these were Pemaquid Oysters. It was a special that night so it wasn't written on the menu.. These were really good! There was some kind of citrus sauce in the middle for dipping but all these required was a little squeeze of lemon and they were fantastic. 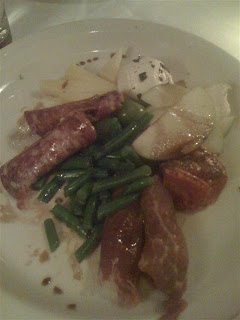 We also decided to get the Giorgio’s Antipasto. This was also excellent. There were a couple pieces of prosciutto, soppressata, boccaccini and robiola cheese, green beans, olives and apples. The green beans were barely touched by us to be honest but the rest we devoured.

Then came our entrees. I was so excited. I had been dying for this dish and it delivered. 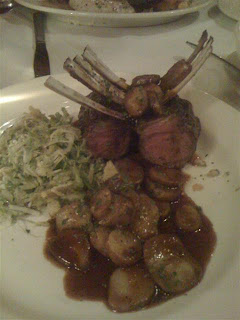 The only thing I didn’t care for were the shaved Brussels Sprouts. These were combined with parmesan cheese and I think the cheese was a bad idea. To me there is nothing better than a simple roasted brussels s sprout with a little salt and pepper. Why mess with a perfect vegetable?

Mr. T ordered the Pan fried Trout with Molasses Braised pork Belly. The picture doesn’t do this dish any justice. 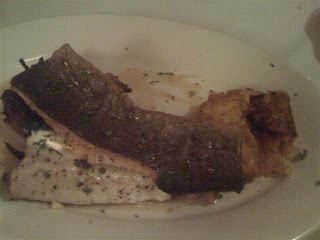 The trout and the pork belly were so interesting and really played well off each other. The whole dish was covered in an apple cider reduction which again helped the whole sweet and savory come together. It also came with a side of corn pudding, which was actually more like a muffin ,but really tasty.

We also ordered a side of Parmesan Mashed Potatoes. These were okay but we barely touched them. We were to into our own dishes of fish and meat to be bothered filling up on potates! 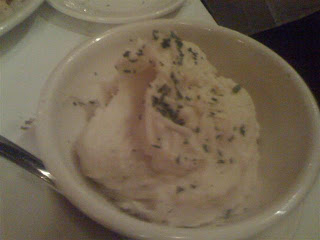 Well after all of that food we were pretty stuffed…but this is our Valentine’s Day dinner! We needed to end with something sweet! So we ordered desserts.

I got the Walnut Crème Brulee with caramelized bananas 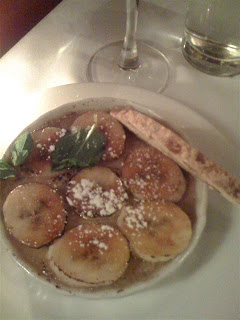 Wow- what a totally new spin on a Crème Brulee! The top was lightly dusted with powdered sugar and although it was mostly bananas it still maintained that classic crisp sugary top. The walnuts really took a back seat here flavor wise but that was alright with me. I love caramelized bananas!!! 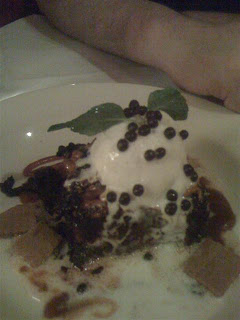 We ended our meal very happy and content. When the bill arrived we wondered aloud once again why we don’t come here more often. That fantastic meal was a pretty reasonable one as well.

Giorgio’s is one of those true gems one is lucky to have in their neighborhood. It’s good to know they are still making such wonderful food and my return visit won’t take as long next time