Holy cow! Who saw that coming! One of the best Super Bowl victories of all time and the Giants are the ones that pulled it off. Mr Trekker is a HUGE Giants fan. So when Eli threw that bullet into the end zone we were going crazy!!! I woke up the next morning with half blurred memories of drinking way too many beers and some kind of weird blue shots chanting "Eli" "Eli"!

Now normally after a night like that I would be done for the entire day. I had pro-actively taken the day off of work ahead of time just because I knew I wouldn't be feeling too well after such a big game. But you know what- I woke up feeling great!

I literally bounded out of bed with the adrenaline from such an amazing victory still pumping through my blood. I wanted to continue the celebration but had no idea what to do. Mr T was on the couch dedicated to watching sports highlights all day but I needed to get out. I decided to call up Mr. T's sister, who works from home, to see if she wanted to go check out one of the amazing lunch deals I'd heard about around the city.

Minutes later I was out the door and headed down to Perry Street to meet up with Kate.

Perry Street is located way over on the West Side Highway inside the bottom of one of the glass Richard Meirer buildings. I walked inside and was surprised to see it quite deserted. There was a table of two ladies, one group of five and a table of two men and that's about it. I was the first one to arrive so once the waiter sat me at the table I had a chance to look around the place

The space itself is very calming with white hues and lots of open spaces. Very minimalist in terms of decor. They had a couple of round banquets that would be great for big groups and windows lined each wall.

The waitress brought me the menu and the first thing I noticed was the wine specials on the left hand side. They had a Pinot Blanc, a Torrontes and a Cotes du Rhone listed for $5 a glass!

Now I'm not one to have a glass of wine at 2:00 on a Monday but at these prices I felt I had to! Also I was still celebrating the Giants so I figure that was a great excuse.

I ordered a glass of the Pinot Blanc and then Kate arrived.

Once she looked at the menu, she agreed with the wine price and decided to try a glass of the Cote Du Rhone and we placed our food order. At Perry Street you pick 2 courses from the list and a dessert for $24. What a bargain!! This might be the best deal in the city!

We were just starting to rehash the events of the night before when the bread arrived. 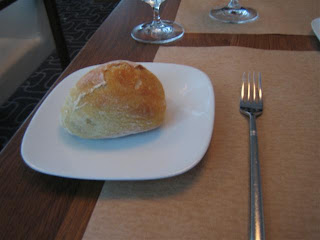 They gave us each a roll and we dug in. 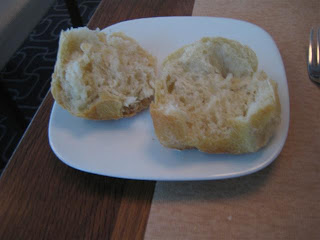 The bread had a nice soft center and slightly sweet taste. It wasn't particularly special but it was a good start to the meal with our wine. 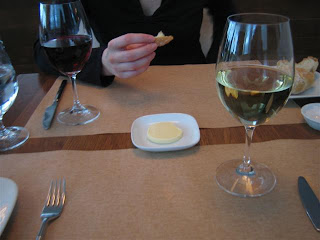 Then the waiter brought each of us out an amuse bouche. 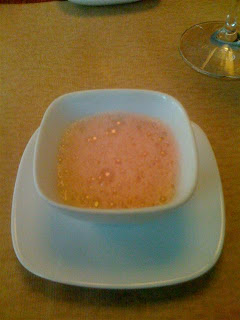 This was a celery root and cranberry soup. As you can see it was very pretty to look at with a beautiful rose shade. 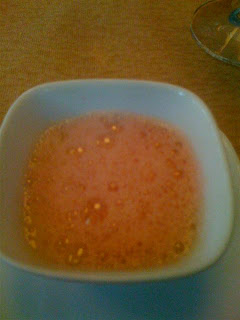 The soup itself was very good. It had a thick, almost velvety texture to it. I had a celery root soup amuse bouche at Jean George proper and hated it- this was much much better.

Then our first courses arrived. I had ordered the Spinach and Goat Cheese Omelet with Shoestring Potatoes. 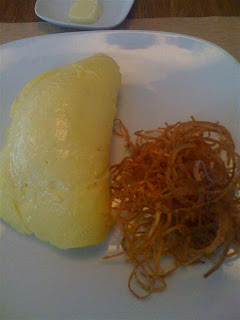 I have to say it didn't look very appetizing when it arrived but then I cut inside. 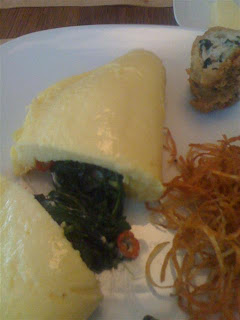 The egg itself was okay...I think it could have been a little fluffier with a better egg to cheese and spinach ratio but it was pretty good. The shoestring potatoes were nice and crispy and a perfect complement to the omelet. 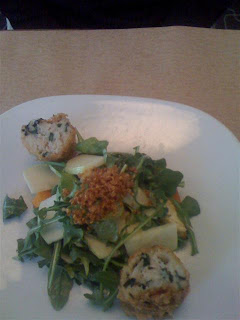 This dish was much more appetizing to look at when it arrived but unfortunately it did not deliver. There were just too many flavors going on. I had a bite of the crab and hardly tasted it. Instead the entire dish was overwhelmed by an overall tart flavor.

So we were a little disappointed with Kate's dish but had high hopes for our second courses. 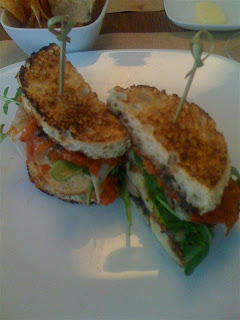 I thought this was really good! The top half of the bread was layered with a roasted red pepper puree and the bottom of the bread had what tasted like an olive tapenade. The layer of Speck gave everything a slightly salty taste.

I ended up taking a little bit of the red pepper spread off since there was so much but overall I really like my dish.

It came with a side of homemade potato chips which I honestly only had one of- they were quite boring and I never felt the need to go back for more.

You know the Lays slogan "Bet you can't eat just one?" Well here I could! 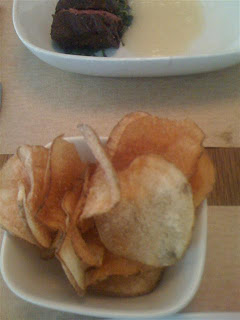 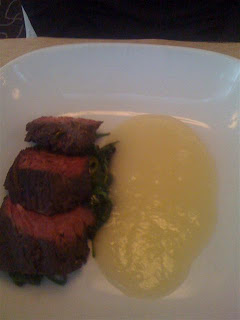 Unfortunately this dish completely bombed. The steak itself was so tough it was almost rubbery. The spinach and cheese had a flavor of jalapenos that completely overpowered everything. Not only that but the whole cheese thing was totally unappetizing.

At one point Kate said "They really treated my steak like a fondue party gone wrong."

I thought that pretty much summed the dish up perfectly! At this point we had ordered another glass of wine and were feeling the effects more than usual since it was so early in the day and ended up laughing about how bad the dish was for a while.

I felt kind of bad that Kate was 0-2 at this point but luckily our desserts fared much better. 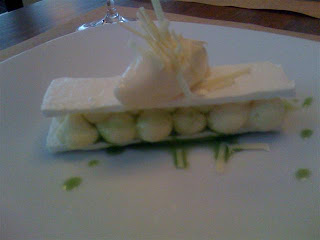 There were balls of white choclate mousse sandwiched between two layers of meringue and topped with a scoop of yuzu ice cream.

This was light and refreshing! I was so full but I ended up eating the whole thing! 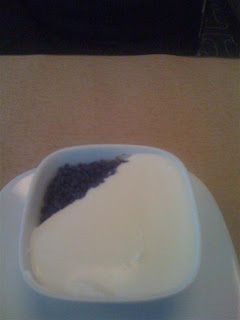 She also loved her dessert but couldn't come close to finishing it because it was so rich.

So in the end my meal was pretty good but Kate's was less than stellar. She even said she never come back.

When we looked back on the food, especially Kate's, there were just too many things going on. We both felt a little like we were eating at a southwest Bobby Flay type restaurant rather than a Jean George establishment.

I think I'm going to give this place another try in a couple months. With the $24 price tag I really want to like the place! Oh well- at least we both enjoyed the cheap wine!