February 17, 2008
It was such a cold and windy day on Saturday I really felt like just curling up somewhere with a nice warm drink. I had been wanting to try out Saint Ambrous because I heard their coffe was excellent. On the way there it got so cold though that we decided to make a change and headed to Caffe Dante which was closer.

Caffe Dante is an Italian Coffee Shop that has been around since 1912. They serve food as well but I've never eaten a meal there. The place itself is cute and cozy though.

We sat down and ordered up a couple of drinks to warm ourselves up a bit. I got the Cappaccino Dante. 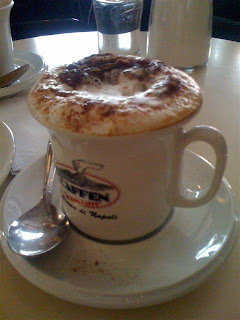 The Cappaccino Dante is basically cappaccino topped with a dusting of cinnamon and cocoa. 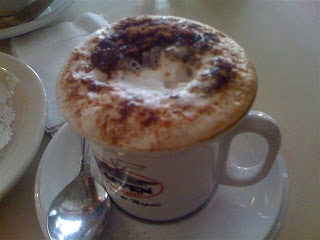 It was really creamy and oh so delicious. Caffe Dante really knows how to make a good cappaccinno. Mr T had a double espresso which was also pretty good. No where near the Fika goodness but pretty darn good.

Caffe Dante has tons of delicious looking pasteries like cannolis, eclairs, tiramasu...Just tons of Italian desserts. I'm trying to cut down on the number of sweets I eat a day so I decided just to go for two mini cookies rather than a huge piece of cake (which I really wanted). 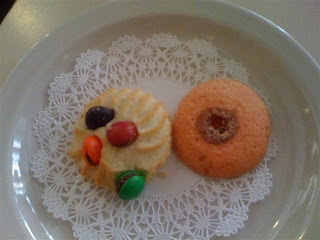 The pink cookie was cherry and really quite nice. The second I thought was just an M&M butter cookie but it had the flavor of anise. I hate anise!! I don't know why people have to throw this in and ruin a perfectly good cookie.

Apparently this place is a big tourist spot because right as we were finishing our drinks a bus load of British teenagers filed into the place. And I'm not exaggerating-it really was a busload. There must have been 30-35 teens!

It was a little overwhelming! Luckily we were finished so we grabbed our check and left. Caffe Dante's a great spot for a quick pick me up on a cold day.
Caffe Dante