May 17, 2017
2016 was Book of Mormon summer for Mr. T and I.  We were determined to win front row tickets during their daily lottery and showed up Tuesday- Friday for two months straight and NEVER WON. It was incredibly disappointing and we quit all together.   It wasn't until I found myself in Times Square for work last week that I decided to stop by again. This time as I was placing my lottery ticket into the barrel I suddenly felt a bolt of electricity.  Seriously if this had been a movie, magical beams of light, glitter and possibly even unicorns would have come shooting out from all sides.  I knew was going to win that day- and I did!

Of course with less than a two hour window between winning the ticket and showtime we had to scramble a little.  I called Mr. T immediately to tell him we finally won and to leave work immediately so we could grab dinner before the show. I started to think of places we like in the area; Danji, Sake Bar Hagi, Don Antonio, etc.  All great places but I was feeling something different, something extremely touristy to go along with our touristy Book of Mormon win.  That's when I looked up and saw the big yellow sign for Da Marino. Perfect! 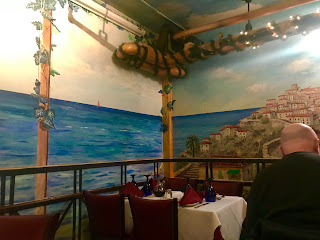 This Italian restaurant has been around forever.  It was actually in one of the very first seasons of Sex and the City (video) so if your a Mr. Big and Carrie fan this is the place to go.  We were seated in the back next to a wall decorated with green ivy, tiny white lights and painted to look like (what I assume to be) the Amalfi coast. It was rustic and campy; everything I was looking for at that moment. 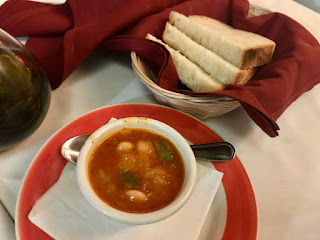 A basket of Italian bread arrived served with a mini cup of Minestrone Soup. I found this to be an incredibly strange amuse bouche for two people to share. 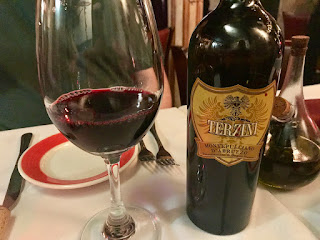 The wine list was also a bit unusual as it didn't have any winery names listed just the varietal Cabernet, Merlot, etc.  I asked for a carafe of Montepulciano and the waiter assured me that spending $10 more for the bottle was a much better idea in terms of quality.  Since I didn't know what the winery of either was as that moment how could I argue? 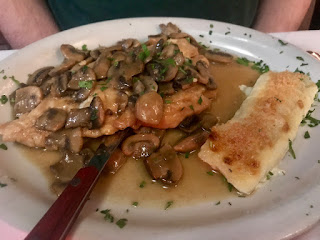 We were in a serious time crunch so we skipped appetizers and went straight to entrees; Chicken Marsala for Mr. T and the Lobster Ravioli special for me. 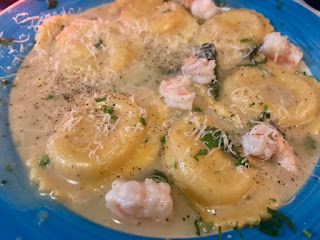 The chicken was a bit on the dry side but the sauce was nice while my lobster ravioli was quite delicious but the sauce was so rich and buttery it weighed down the flavor of the seafood.  A much better choice would have been anything with the delicious vodka sauce which was hearty and well balanced. 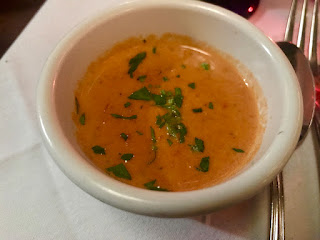 The piano player stared singing when our food arrived and I found the ladies bathroom decorated with all sorts of over the top statues and fountains.  These were the touristy things I was hoping for and Da Marino certainly delivered in that aspect.

However when the check arrived I was reminded of exactly why we don't frequent spots like this-it was ridiculously expensive.  We have had much, much better food and wine at NYC hot spots like Scarpetta and Lupa for a fraction of the cost.  Looking around at the tables of families filing in next to us to dine I started to get a little sad and hoped they were there more for the tourist experience as well and not just spending away a paycheck. 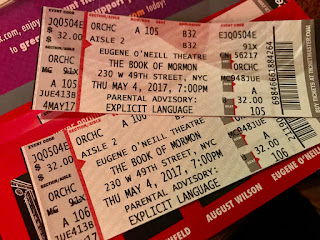 But in the end we had an incredible night.  Book of Mormon was absurdly perfect, Da Marino matched my tourist needs and we could finally check winning the lottery off the list- success!