August 09, 2016
Ask any New Yorker where to find the best slice of pizza in the city and chances are you'll get a passionate, almost aggressive response that may even turn into a debate with others around. I find this happens most often when I'm out in Brooklyn.  Brooklynites have some serious pizza pride. Of course they have the big spots like DiFara's, Roberta's and Totonno's but there are so many other neighborhood joints that locals swear by; one being Originals Pizza out near Bergen Beach. 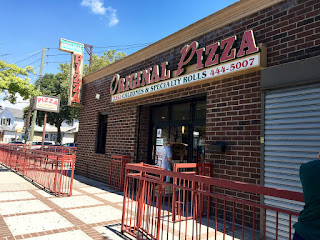 This old school spot has been serving pizza since 1967 and it doesn't seem like much has changed.  It's the standard counter service pizzeria with a few seats inside and a large outdoor area with picnic tables perfect for enjoying the summer sun.
There were about 15 people in line when I arrived at lunch time and instead of listening to their orders I was stupidly playing PokemonGo and completely missed the fact that every person ordered the same exact thing.  Of course when you're at a local spot go with the locals. I instead ended up with my usual slice of pepperoni. 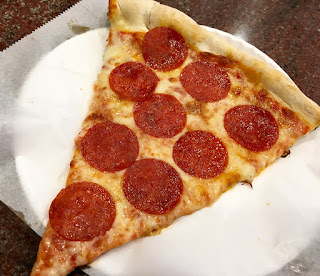 This slice looks incredible now but it took about 20 napkins to get all of the grease from the pepperoni off.  I mean it was the greasiest pepperoni I've ever encountered.  Once the grease was gone however this slice really shined.  The dough was super thin, so thin there would be absolutely no way to eat this pizza without the standard fold over.  It had the perfect ratio of sauce and cheese and the bottom had an even char all the way across.  It could have been a tad more crispy; I would probably ask for well done next time but otherwise this was one serious slice.  It was so delicious there was absolutely no need for the pepperoni topping which is probably why everyone else ordered a regular. 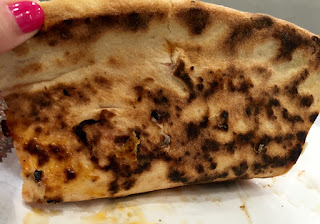 The other slice on every table was the Penne Vodka.  Now to me a pasta laden slice just seems like way to many carbs but the fact that everyone, I mean 20 out of 20 people, had on their table one regular and one penne slice, it must be damn good.  Definitely on my order for next visit. 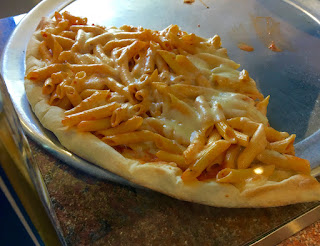 Original Pizza is cash only so make sure to bring along some bills and get ready to settle into a great slice.
Original Pizza
2351 Ralph Avenue
Brooklyn, NY 11234
Brooklyn Mill Basin Original Pizza pizza