December 22, 2008
I woke up Sunday morning and was determined to get all of my Christmas shopping done before it was time to watch football.

I decided to head out to the farthest place first, so I jumped on the 6 train and headed to the Upper East Side. I needed to pick up a gift certificate at Café Sabarsky and I decided I might as well enjoy a cup of coffee while I was there as well.

Unfortunately a lot of other people seemed to have the same idea as I did and there were no tables left for me when I arrived.

The maitre d’ told me the downstairs café, Café Fledermaus, was open with the same menu so I decided to check it out.

I walked in the café and was greeted, rather jovially, by two waiters with thick Austrian accents.

I was kind of taken a back by the enthusiastic greeting at first, until I realized there was no one else in the café besides myself. These guys were probably dying for a customer, so I happily took a seat.

Everything about the downstaits is kind of mod. Black and white checkered floors, sleek black tables and shiny seats.

I didn’t look at the menu I simply ordered a cup of coffee and what came out before me next was quite impressive. 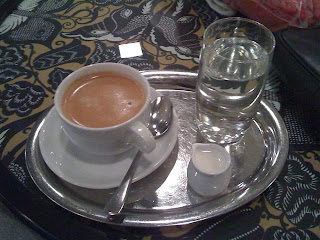 A silver tray with my coffee, a little pitcher of milk and a glass of water.

I really felt like I was someone special! Never before have I had such a beautiful looking tray.

Then I tried the coffee.

OMG it was fantastic!! Quite possibly the best coffee I have ever had.

I have heard that there is no replacement for the coffee in Vienna but wow- this Viannese coffee was superb.

It was big and robust but also perfectly smooth.

I could have drank at least 3 more cups.

Thank goodness I didn’t though!

Fast forward about an hour later and I was a caffeine mess! I had been planning to do some Christmas shopping and I couldn’t keep focused.

My eyes felt like they were open bigger than they have ever been before. I was practically running down Madison Avenue, sweating a little bit in the freezing cold and feeling a bit like a mad man.

I don’t know if it was because I didn’t eat anything yet that day, or maybe because I have given up my daily coffee and save it now for weekends only and my tolerance was down…or maybe it was juts some really Strong coffee!!

I ended up walking (running really) all the way to Union Square!

I’m not gonna lie either. I loved it! I haven’t had a caffeine rush like that in years!!

So anyway- back to the café- I enjoyed my coffee and got the check.

The bill came to $6.50 which is pretty pricey for a cup of coffee.

I’m glad I don’t live closer to the café because it would be hard to pass up such a wonderful cup of coffee every day and I certainly can’t afford that daily price tag.

But once in a while it's a nice treat.
Cafe Sabarsky/Fledermaus