December 10, 2008
My two friends from upstate came to visit last weekend and I was psyched!

Why? Because they are fun people but more importantly they love good food and wine as much as me!

So I knew it was going to be a great weekend. I just didn't realize the amount of food we would eat! Offdah! Talk about being indulgent!

But I'm getting ahead of myself.

Friday started with a half day of work and then off the Grand Central to pick up the Pitted Pruner and Arian.

The one thing I love about the Pitted Pruner is that he almost always knows what he wants to eat.

I can sit and contemplate for hours, agonizing over the various choices.

The Pruner gets a hankering and that's that.

It was no different today. I rolled up and he says "let's grab some sushi."

Sure! I already liked the way this weekend was starting.

So we head over to Sushi Yasuda.

Now we knew we had reservations for Peter Luger later so we didn't go crazy but ordered a couple rolls and some amazing pieces of Eel and Toro.

Yasuda delivered as always and we were off to start the drinking portion of our day.

Our first stop was the Ginger Man for some flights of beer, then onto McSorley's for some light and darks,then onto Winebar to cleanse our palates a little from the beer and get ready to take on some meat!

The day I moved to this city I was told that in order to experience the best steak in my life I should go to Peter Lugers.

Eight years later I can finally say I had the Luger experience.

We were all so excited!!!

We had a 6:45 reservation so we hopped in a cab from Winebar and drove across the bridge.

When we arrived the place was packed! There were a ton of people milling about up front and we ended up waiting about 10 minutes in the bar area for our table.

Peter Lugers is definitely a no frills kind of place but it has that old school manly kind of charm about it. The wooden beams and square tables just kind of fit, and having come straight from McSorley’s we were already in that old fashioned mood.

We took a seat and decided to order a bottle of Cabernet, two steaks for two, a bacon appetizer and the creamed spinach as a side.

As soon as we ordered our waiter brought us over our bottle of wine and quite a tasty basket of bread. 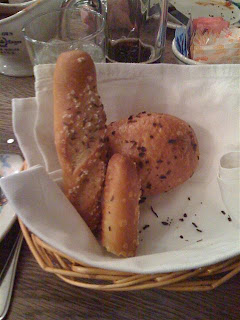 I ended up grabbing a delicious onion roll that was slightly warm and had just the perfect amount of seasoning on it.

I had barely finished my roll when I saw another plate, this with one of my favorite meat products, placed before my eyes. 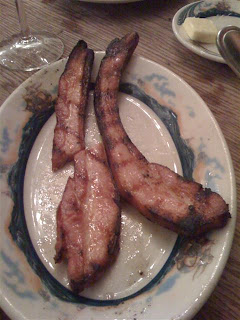 Hoolee Cow!!! These are some enormous slices of bacon!

We decided to only get two pieces to split between the four of us and I have to admit, I wish we had just gotten our own.

This bacon had so much flavor but not in an overpowering way. It was simply moist, smoky and delicious.

Really I think it may have been the favorite part of my meal.

Not to say that the steak is far behind!

Here is the Porterhouses for two. 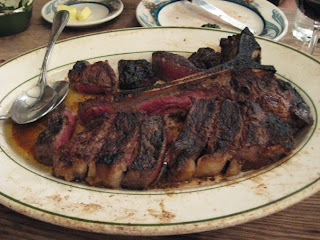 Lugers Porterhouse comes sliced up on a gigantic plate perfect for just grabbing and going at it.

Our meat was cooked a perfect medium rare and man it was awesome!

See that pool of liquid at the bottom of the pate? Yeah that’s just some melted butter.

I was a pure glutton and dipped each meat piece into the warm buttery pool.

Glorious is how it tasted. Glorious!

Everyone told us to try the steak sauce there, and well I just don’t get it.

Why would you want to put a sauce on meat that is this wonderful??? I didn’t want to do anything to this steak.! It was moist, delicate and full of flavor.

I did end up trying the sauce though and it was really strange.

It tasted like cocktail sauce for some shrimp? Is that possible? Did they just refill the bottle wrong?

Part of me wondered if all of the beer and wine had caught up with me and maybe I messed up and tried to put the cocktail sauce on rather than the steak sauce.

A qiuck call to my freinds confirmed it. I was right. It did taste like that. Weird.

Anyway the steak didn't need it.

So do I think Peter Luger was the best steak ever?

Mr. T thinks it is and I would put it up there with the best. I feel like I have to go back at least one more time to make sure though before I make that claim.

That will not be hard to do. I have been dreaming about that bacon all week!!

When we got the check they gave us some big golden chocolate coins! 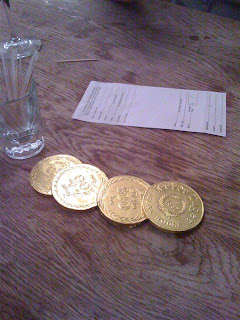 I was too full for dessert so this was the perfect end to a fantastic meal.

I left full, drunk and happy.

Lugers is not a cheap meal by any means but worth the price tag and definitely worth the trip to Brooklyn and then some.

We left Lugers and took a cab back to the city where we imbibed some more (maybe too much?) but had a fabulous time.

We woke up the next morning in great need of a fantastic brunch and even more fantastic Bloody Marys.

Kathy YL Chan said…
Oh boy, I still have yet to visit Peter Lugers...but your photos have me convinced I must go sometime very soon. I've also yet to meet a person who had room for dessert by the time they were finished with the steak...heheheh :)
December 15, 2008 at 1:03 AM

Tasty Trekker said…
I actually had a little room for dessert but didn't want to be a total pig in front of my friends!
(If it was just me and Mr. T I would have) Report back if you go!
December 16, 2008 at 11:08 PM

Anonymous said…
I thought it was just me that thought the peter luger sauce tasted like sweet cocktail sauce! The bf thinks it reminds him of surf n turf without the seafood part.
December 18, 2008 at 5:32 PM

Anonymous said…
The buttery golden goodness resting at the bottom of that steak plate complimented the meat as the moon itself compliments the earth.
January 22, 2009 at 12:39 AM