Sunday at The Smith

April 17, 2008
We had some last minute house guests on Saturday night which was nice. Why so nice?

Well first of all because it was one of my best friends but also because this friend loves something just as much as I do- brunch!!!

Mr T hates brunch. He literally despises it for no reason. So the only time I get to enjoy this meal is when we have company.

I was excited to go and eat some Croques at one of our favorite brunch spots Resto but I called and it was all booked up.

I had heard that The Smith had been getting some good brunch reviews so we headed down there instead.

We got to there right around 12:15 and squeaked in before the big brunch crowd and were seated right away.

The Smith offers a free cockail wth each meal and had a bigger selection than just your avaerage bloody mary. I decided to order a bellini while the rest of the table got the blood orange mimosa's 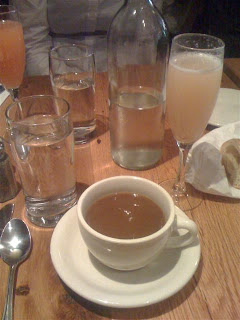 I have to say I was a little jealous when the mimosa'a came out. They looked so good with that fuzzy red orange color. My Bellini was prepared well though, not too sweet with just enough champagne.

For my entree I decided on the Eggs any way with bacon and hash browns. (Boring I know) 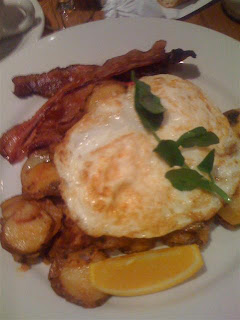 A couple peices of the bacon were charred on the edges and really crispy. I love extra crispy bacon so this was right up my alley.

The Hash Brown were little discs of potato with the skins on. Almost like you would have scalloped potatoes. These were pretty good although I thought they could have been cooked a little more for crunch factor. 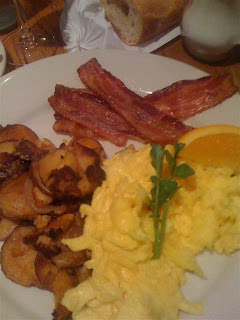 Mr. T got the special soft shell crab sandwich. Soft shell crab kind of grosses me out so I didn't take a picture. Who gets that for brunch anyway??!!

The best dish of the morning I think was the Croaker. 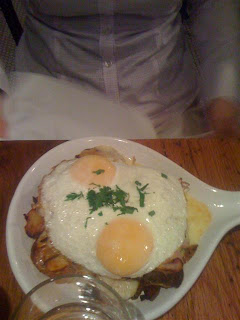 Basically just a Croque Monsieur with eggs, ham and gruyere chesse. The croque came on top of sourdough bread which gave it a slighly sweet taste.

This Croque looked small at first but it was actually enourmous. My friend barley finished half of it.

There's a lot of thick slices of ham under those eggs!!

So overall I thought The Smith was a good place for brunch. The food was good, the atmosphere was bustling but not overly loud and it came with a delicious free brunch cocktail.

What more could a girl want on a weekend morning!!!

The Smith
brunch The Smith

Anonymous said…
Who gets soft shell crab for Brunch? you ask.

NormanTheDoxie said…
I've been to The Smith for dinner. Noisy it is, but it's great for a casual, inexpensive (by NYC standards) dinner.