I’ve finally found the love of my life!!! It’s a muffin that’s soaked in pork fat!

April 01, 2008
Okay so that isn’t really true. I found the love of my life 10 years ago and then last night he scored a last minute dinner reservation where I meet the second love of my life, the Pork Fat English Muffin.

But I have to start at the beginning. What was supposed to be another ho-hum Monday turned into a fantastic culinary day.

I woke up Monday morning and decided I needed a day off so I called in and did a little work from home in the morning. Mr. T called around 11:00 asking if I wanted to meet up for lunch and catch the first half of the Yankee game with him.

So I jumped on the train and headed up near his office. I told him I would look around at some of the bars up there and see what looked alright. As I was dodging the pellets of rain I literally ran into a place I’ve always heard about, but never been to, P.J. Clark’s.

In case you didn’t know PJ Clarks is old school New York. The building dates back to 1868 and it really still feels like an old saloon inside. It’s always packed whenever I come by, so when I saw two bar stools open I grabbed them and called Mr. T to come meet me.

Once he showed up we went right for the signature item the Cadillac. And the first item on my awesome day of eating came out.

A t first glance the burger isn’t anything special looking. I was actually in mid-sentence when I took my first bite and once the burger hit my taste buds all thought left my head except for the amazing taste . 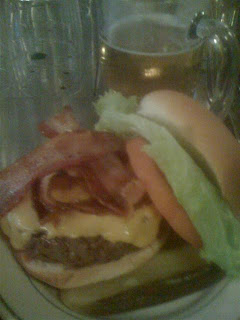 The burger was so juicy that the entire bottom bun was soaked through. The bun was perfectly soft and the bacon! Man that was some awesome bacon!!! I wanted to ask what kind they used but never got around to it. 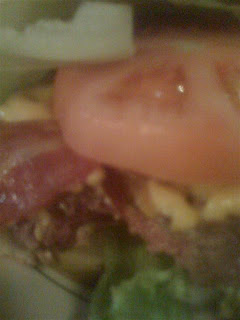 Even the pickle this burger came with was awesome. Nice and crispy!! I really couldn’t believe how good it was! I was in burger heaven! 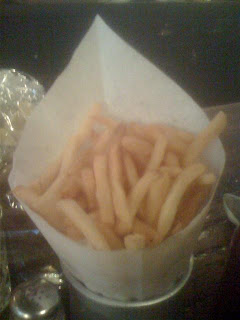 The fries were really good as well. Salty, thin and crispy. Just the way I like them.

This may have moved up into my all time favorite burger spot. I have to go back a couple more times to ensure it wasn’t a fluke but I'm pretty sure it wasn't.

That’s a pretty hefty price tag. But I honestly think it was worth it for the enjoyment I got from my burger. Really good stuff.

So after lunch ended Mr T went back to his office and I headed home to do some errands The Yankee game had been rained so there was nothing else to do during the day than laundry, etc.

A little after 6:00 Mr T came home. Now I am an early eater and usually have dinner made by around 6:30 or so. Since we had eaten lunch so late I wasn’t feeling hungry just yet so we decided to hold off.

Then as I’m taking dishes out of the dishwasher Mr. T suddenly says “What do you think about eating dinner around 8:45?”

I must have looked at him like he was crazy. 8:45? Why would I want to eat that late? Doesn’t he know I have to get up early for work? Was he just being obnoxious?

Then he turned the computer screen around so I could see it and calmly said “I just got us reservations for Ko.”