April 13, 2008
It was such a gorgeous day on Thursday I called up Mr T to see if he wanted to grab some dinner outside. We knew everyone in the city had the same idea and most outdoor places would be packed. We decided to go for a neighborhood standby where we can almost always get a table- Mumbles.

Mumbles is really the definition of a corner bistro. It's located on the corner of 3rd and 17th street and serves a pretty wide variety of food.

Mumbles has some good staple dishes on their menu but their specials are almost always fantastic. They also have drink specials every night where they lower the price of a few select wines and beers. That night Blue Moon was $3.50 a pint- not to bad.

We placed our order and they brought over a basket of bread. 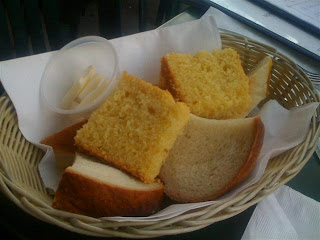 I usually forgo the bread basket but I was starving so I grabbed a piece of cornbread.

Wow! It was really buttery and rich. The first bite was heaven compared to that dry crumbly stuff you get at some places.

Now since it was before 7:00 we got the early dinner special which is basically a free salad or soup with each meal. 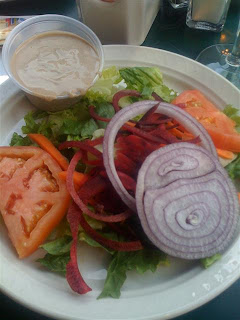 It's basically your average dinner salad, nothing too exciting but good. Growing up I remember getting salad with every meal for free. Now it seems like a rarity.

Mr T got the corn chowder which he thought was fantastic. The soup was mostly pureed corn so the consisitency was thick and creamy. I took a picture but it honestly looked kind of gross so I didn't put it up. Creamed corn is for eating only :)

Then came our mains.

I ordered off the regular menu that night and got the Grilled Yellow Fin Tuna. 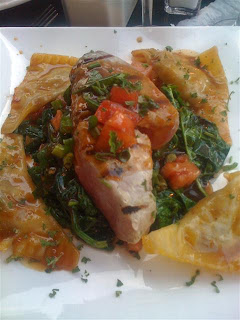 First of all the presentation was lovely. Second of all it was very good.

The tuna was slightly seared, just as I had asked, and came covered in a teriyaki beurre blanc over wilted greens. This dish was something I would expect at a higher end Asian restaurant. It was really quite outstanding.

It came with lobster dumpling on the side which were alright. Kind of a take em or leave em kind of side. The tuna was so good it didn't really need anything else.

Mr T ordered from the specials menu and got the tortellini carbonara. 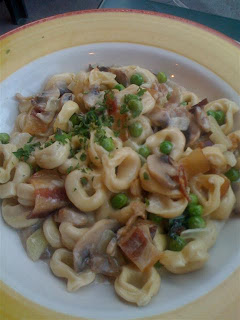 This dish was alright. The tortellinis didn't taste homemade or anything but the flavors of the bacon and peas were nice with the sauce.

So overall it was a good dinner with the tuna, corn chowder and cornbread being the highlights of the meal. We would eat at Mumbles more but the service can be a little spotty. It's nice to have in the neighbourhood though for dining al fresco.