September 26, 2017
My final birthday celebration was a solo lunch at Gabriel Kreuther.  Located right off Bryant Park on 42nd Street this restaurant is like a hidden oasis of calm and beauty right in the middle of busy Midtown East.  Long wooden beams surround the main dining area with a bright platinum ceiling and luxurious ivory banquettes dotting the floor. 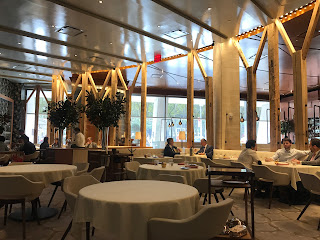 The menu is described as Alsatian inspired cuisine and lunch offers a two course prix fixe for $58 with the option of additional savory courses at $29 a plate. 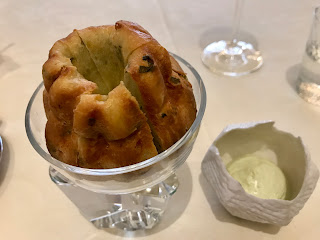 My meal began with a classic Austrian Kugelhof; a springy sponge like cake flecked with raisins and citrus.  I'm not a huge bread person but this was incredible.  I loved the light fluffy texture of the dough and the creamy chive butter that arrived alongside could make just about any dish a five star experience. 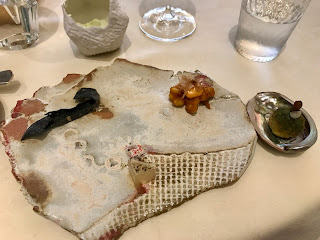 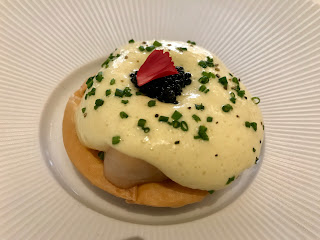 First Course- Sturgeon & Sauerkraut Tart with american caviar mousseline and applewood smoke.  This is a signature dish of Gabriel Kreuther which he brought over from his days at The Modern.  It arrived in a glass dome that was then lifted to release the gorgeous aroma of applewood smoke into the air.  The creamy mousseline combined with the salty caviar and delicate pastry crust was absolute perfection. This is a must not miss kind of dish. 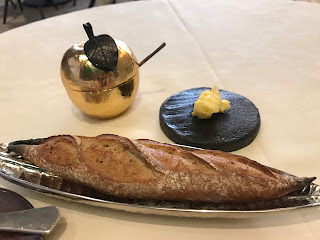 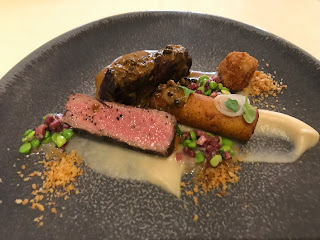 Second Course- Grilled Black Agnus Beef Tenderloin with shallot crumble, gateau brioche and green peppercorn jus. I hardly ever order steak unless I'm at a proper steakhouse but I was really feeling like red meat and this did not disappoint.   The meat was so tender, like cutting into a stick of butter, with a crisp salty char on the top and a nugget of luscious sweetbreads on the side. 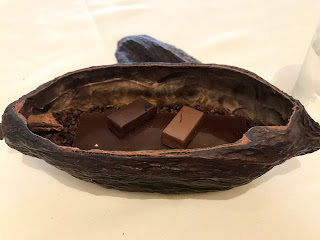 To complete the meal a small slice of pistachio cake and complementary mignardises served inside a beautiful cocoa bean shell. 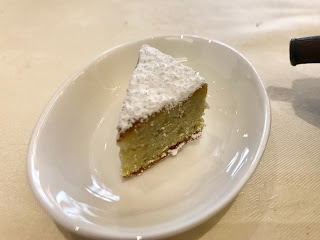 This was such a fantastic meal.  In addition to the gorgeous setting and incredible food the service was wonderful.  I was a bit worried it would be stuffy but everyone I interacted with was so warm and inviting, like an extended restaurant family.   The wine list was also a nice surprise.  There were several high end bottles but also an entire page of reasonably priced half bottles that were perfect for a solo diner such as myself.  I really can't say enough about this restaurant.  Gabriel Kreuther is a true gem to have in New York City.