Birhday Part I- Sushi of Gari 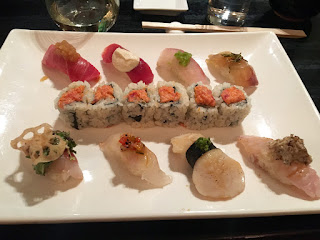 Chef Matsatoshi "Gari" Sugio is probably one of NYC's most well known sushi chefs.  He opened his flagship restaurant Sushi of Gari Upper East Side back in 1997 and has continued to open spots all over the city and beyond including Tokyo and Los Angeles.  His signature style of sushi topped with various sauces has created a cult like following. 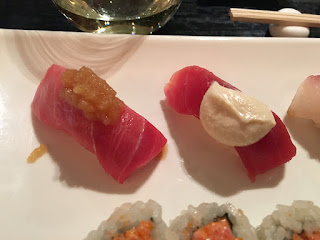 Tuna with creamy tofu sauce, Japanese Snapper with salad, Black Snapper topped with seaweed and the crazy combination of Fluke with mushroom risotto were just a few of the interesting pieces. 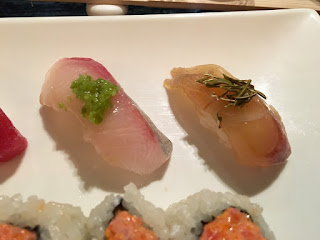 Of course there was the standard Spicy Tuna Roll but all of the other nigiri had a fun little twist.  Nothing completely blew me away but it was a tasty, albeit pricey sushi lunch.  And I was all alone which actually made it incredibly relaxing.  But birthdays are about celebrating too so after lunch I headed downtown to the friend portion of the evening and lots more delicious food :)

Unknown said…
My birthday was sunday!!
What a fantastic lunch, and great that you were at least able to skip out of work to treat yourself :)
Ttrockwood
October 6, 2016 at 11:36 PM