The Impossible Burger at Momofuku NIshi

September 19, 2016
Just about everyone in NYC is talked about the new Impossible Burger from David Chang.  His Chelsea Momofuku Nishi gets absolutely slammed at lunch and happy hour with eager vegetarians, vegans and carnivores alike clamoring to get a taste of this "unburger".   Created by a group of scientists, farmers and chefs who collaborated on getting that same delicious flavor of beef into an entirely plant based burger.  What they discovered was a molecule called "heme" which gives meat its that rich beefy flavor and even the red bloody color.  This "heme" molecule also occurs in plants and serves as the basis for this Impossible Burger.  Of Course veggie burgers have been around for ages and NONE of them taste like real beef...does this Impossible Burger really hold true? 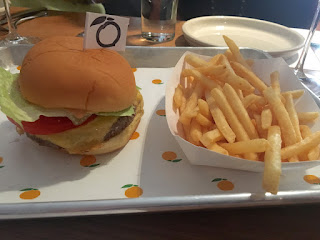 First let's talk about the french fries.  These long, skinny ridiculously crisp fries are perfection. I mean seriously these are reason enough alone to go to Nishi.  The burger itself looks similar to a Shack Burger served thin on a potato bun with a slice of lettuce, tomato, pickles and special sauce. 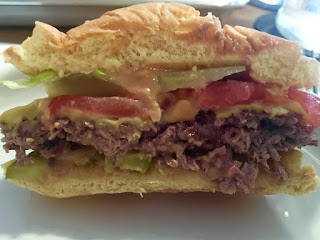 As you can see the midsection looks like a medium done burger, slightly pink in the middle with crispy edges.  This really is the closest a veggie burger has ever compared to a beef burger.  It's juicy with rich mineral qualities and just a faint straw like flavor on the end that gives the small reminder that's its not really meat.  Well done guys- this thing is great.

The Impossible Team is hoping to expand their plant based product to other restaurants and bars across the country so be on the lookout for more of these incredible creations to come.

Unknown said…
That looks astonishingly realistic..! I've been vegetarian for decades now and i wonder if i would even like it if it has a beefy flavor. Near impossible for me to get there when it's being served so could be a moot point.
I do hope that chang adds more vegetarian friendly dishes to ssam bar, i love/hate eating there because there's only ever two maybe three options for me
Ttrockwood
September 25, 2016 at 9:36 PM

Roze said…
I had no idea you were vegetarian Ttrockwood! But I totally agree I hope Chang starts to do more vegetarian dishes on all of his menus. The Butter Noodles are absolutely incredible- certainly not healthy but meat free as well :)
September 26, 2016 at 3:49 PM