September 07, 2016
I love Vermont.  Mr. T and I go about 4 times a year and something about those rolling green hills, the fresh crisp air and all that great beer, cheese and maple syrup just make for a fantastic trip.  Neither of us did much traveling this year so an end of season trip with friends seemed like the perfect way to close out summer.  Of course nothing ever seems to go as planned for us.  The night before Mr. T starting feeling sick and by the next morning it was painfully obvious he wouldn't be coming with me to Vermont (or even leaving the apartment for the next few days).  I felt absolutely terrible leaving him home in this state but he insisted I go on with the trip as we already had friends to meet, beer fest tickets purchased, hotel rooms etc.

Now I don't cry very often but when I do I have a lot of trouble stopping once I start. I felt so bad for Mr. T being stuck at home I pretty much cried my entire cab ride to Penn Station onto the LIRR and AirTrain all the way to Newark Airport.  I was a disaster and that's when the airport text messages began. Every 45 minutes I would get a text stating that my flight was delayed, moved up, delayed, moved up...over and over and over again.  Nine hours, three standby's and multiple crappy airport beers later my 50 minute flight finally took off.  Luckily I have some great friends who waited for me in Burlington (after missing their early morning flight) but the day was just terrible all around and one I hope to erase from memory. 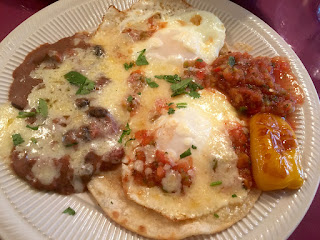 Friday morning I woke up much more refreshed, relaxed and determined to have a wonderful Vermont day beginning with a solo breakfast of Huevos Rancheros at the Stagecoach Inn.  I love staying at this place. The staff are so friendly and the food is incredible from the piping hot cinnamon rolls to the freshly brewed coffee (and the cool little Dachshund that hung out with me during my meal). 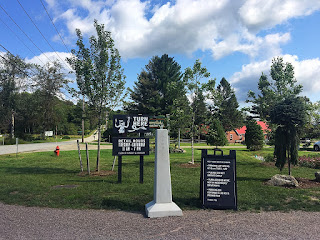 After breakfast I met up with friends and headed to the Alchemist Brewery in Stowe.  We pulled in right at 10:30 AM to see people already leaving with cases of beer.  After about a 15 minute wait outside... 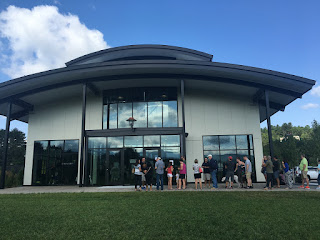 ...and a 25 minute wait inside we were out the door having sampled all three beers, purchased brewery schwag and with our full allotment of cans. This was one of the most efficient and easy beer pickups I've experienced in years and the brand new space is amazing. 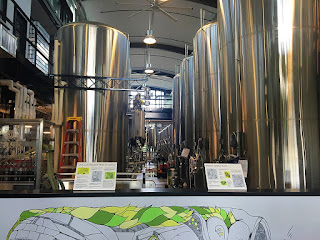 Time to move onto the second brewery stop of the trip Hill Farmstead.  I've been here too many times to count but each visit I'm still amazed by the gorgeous serene setting. Looking out onto that field of green I really felt light years away from the terrible day before.  They also had some great on-site bottles including one of my favorite Hill Farmstead stouts of all time Madness and Civilization #1. 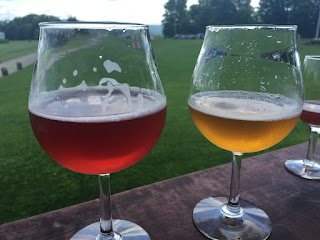 We loaded up the car with more beer and then took a quick trip over to Parker Pie for a Green Mountain Pizza in the backyard topped with cheddar cheese, apples, bacon and maple syrup... 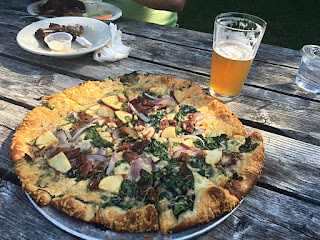 ...and then back into Waterbury for an evening of beers on the patio of Prohibition Pig Brewing in the late day sun. 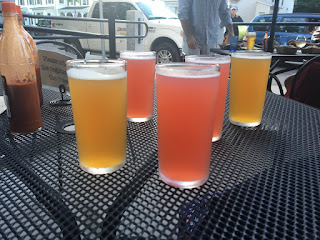