June 01, 2015
The next two days of Memorial Day weekend were completely boat themed.  The first was a stop at North Boat Lobster Company in Hell's Kitchen.  This place is basically just a version of the Frying Pan but with better food and drink prices and a boat that actually moves. 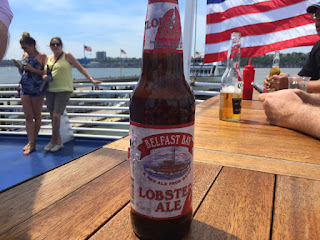 I'm not saying the drinks were fantastic but they had a few additional beer options than just Bud Light and Corona plus a few decent bottles of wine perfect for sharing with a group. The menu is all about seafood with Lobster Rolls, Fish and Chips and some Cajun Spiced Peel and Eat Shrimp. 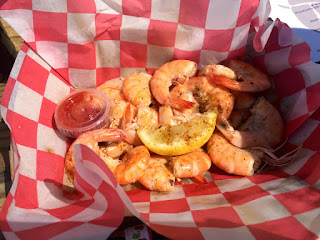 The boat leaves dock at various points during the day for a 45 minute sail up the Hudson River.  The views were fantastic and not having to pay an extra ticket for the ride was a downright steal.  It got really crowded and a little bit like a Frat House at certain points but I would do it again for sure. 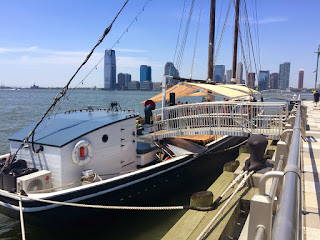 On the opposite end of the spectrum from North River Lobster Co. is the Grand Banks, my second boat stop of the long weekend.  Located way down on Pier 25 of Hudson River Park this boat has a much more elegant atmosphere with a golden canopy on top, a raw bar in the back and a clientele composed of mostly Tribeca/Hampton leftovers.

In addition to the raw bar there's a few small plates to choose from like a creamy Burrata with beets and spring vegetables, Maine Lobster Roll dusted with fennel and this gorgeous Scallop Ceviche with avocado, habanero, kaffir lime and mint. 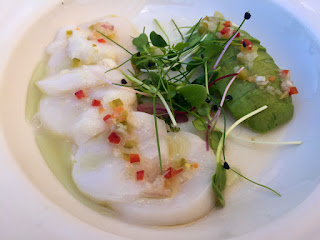 The food is on the pricier side but this dish was worth every every penny for the incredible composition of citrus, seafood and spice.  I envision I'll be eating this same exact dish when Mr. T and I finally get that yacht we've been dreaming about :)  But until then at least there's the Grand Banks.