May 16, 2008
Mr T's sister and husband are moving to Florida in about a month so Kate and I decided to meet up for what may be our last "fancy lunch".

There are so many great lunch deals in this town I can only take advantage when I have a day off. Since Kate works from home and enjoys food just as much as me, she's the perfect companion for these excursions!

We were a little disappointed with our last lunch at Perry Street, so I was somewhat apprehensive about our next pick Asiate. I have heard very mixed reviews but figured the view should hopefully make up for anything bad!

I showed up right at 1:30 for our reservation and the hostess started to seat me at a table in the middle of the room. There were a few tables open right at the corner of the wall to wall windows and she happily obliged when I asked to be seated there.

I didn't get any good pictures of the restaurant so I borrowed some from the Asiate website. 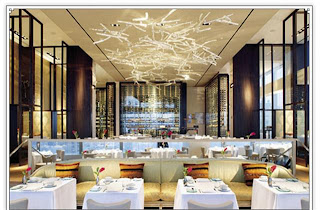 The view is really stunning. You can see all the way uptown and to the east quite a ways. Really quite breathtaking. Kate came a moment later and also needed to take a moment to soak in our wonderful view. 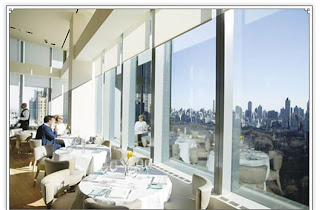 I took a look at the menu and immediately got a pang of nervousness. I had thought the entire lunch menu was a $24.08 prix fix where you choose two options from a variety like Jean Georges. 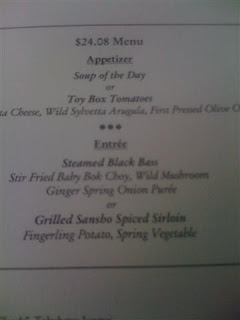 I decided to stick to my guns and go for the prix fix with the steak. Kate went against the prix fix and simply ordered the short rib entree.

We both decided to get a glass of wine and each happened to choose the cheapest wine by the glass of the red and white ($11 and $13 not exactly cheap).

For being the cheapest on the list both were excellent and they were quite generous with their pour as well. 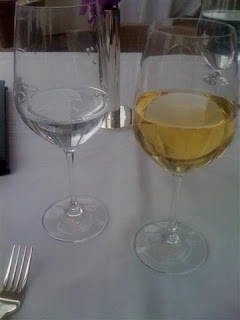 Next a man came around with a basket of bread. The choice was olive, whole wheat and your classic brioche. Both Kate and I went with the olive. 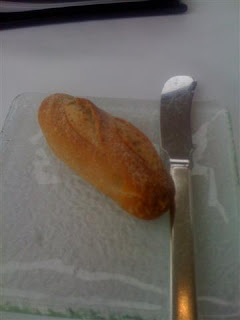 The bread was very good but mine seemed to be lacking a lot of the olive flavor.

I looked over at Kate's piece and she seemed to have double the amount of olives inside! Score one for her I guess!

The one problem I had was with the butter. I had to struggle to cut into it because it was so cold and hard. I'm always afraid the whole thing will go flying and hit someone at another table. If they just let it sit out a bit it would have been much better.

Next my appetizer arrived the Toy Box Tomatoes. 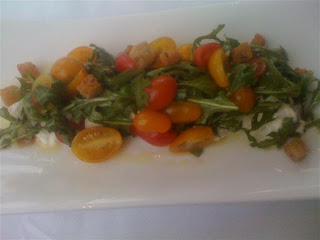 I was honestly expecting some kind of tomato bento box for some reason but this was just beautiful on it's own. Tomatoes, arugula, burrata cheese and some great olive oil. I could have eaten an entree size portion of this dish honestly. It was kin of funny to have a dish like this at an Asian place but hey- the Italians got food down pat so why not borrow?

Next the waiter set down a cup of soup in front of Kate. We both started to protest thinking it was a mistake when he told us it was complements of the chef. How nice! I guess they didn't want me eating my appetizer alone. 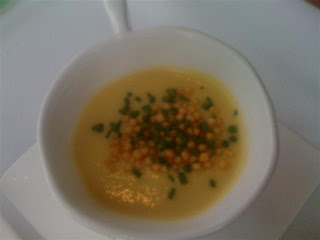 The soup was cauliflower and it had a great velvety texture but there was a hint of some spice we couldn't figure out. We went back and forth, each tasting and contemplating. Finally we asked the waitress who told us it was curry.

Well I'm glad we asked because neither of us had come up with that! I have to say I didn't care much for the soup, probably because I hate curry so much, but how nice of the chef to send that out.

Next our entrees arrived both looking like amazing! I had ordered the Grilled Sanscho Spiced Sirloin. 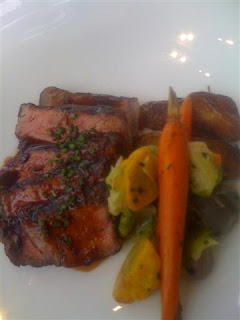 Um okay..seriously I don't mean to compare the two but I had just eaten at Les Halles and this steak blew it out of the water. It was lean, juicy and the sanscho sauce really complemented the steak, whereas the au poivre completely overpowered.

I know in some respects that's like comparing apples and oranges but it was the most recent steak I'd had so the flavors were fresh in my mind.

Kate couldn't get enough of the potatoes on the side which were crispy medallions seasoned with just the right amount of rosemary on top.

The veggies were also fantastic. They reminded me of the vegetable plate I had as an appetizer at Bar Milano. To be honest I got just as many vegetables as a side here as I did as an appetizer there and for a lot less money. 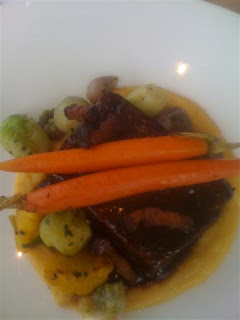 Kate had a similar array of vegetables with her Short Rib. The short rib was very good. Nice caramelized crusty top and a relatively moist meaty interior. We both decided it was very good but the steak dish was the clear winner.

We were both too stuffed from our amazing meal for dessert but they brought us over a little tray with a mini macaroons, dark chocolate ganache an a mini biscotti. 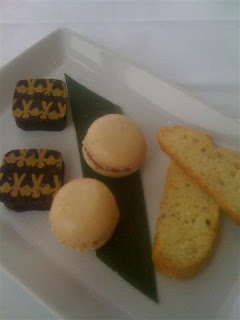 I love the little dessert plates! Its exactly the right amount of sweet I need after a meal and it's free!!

I honestly have to say our lunch was one of the best bargains I've had in the city. For $24.08 I had a fantastic spring appetizer, amazing steak and a couple little treats for dessert.

Yes the glasses of wine were a bit pricey but the pours were nice and the view was spectacular. Lunch was simply fantastic all around. I wish I could do this stuff every day!