May 07, 2008
Mr Trekker and I went to Degustation back during the very first month it was open and it blew us away. The space, the food, the price- everything!

We swore up and down to make it our go-to restaurant for the future.

Well somehow it fell off our radar. Luckily though, a recent chowhound thread brought it back into my mind and I'm happy to report our visit Friday night was everything we had remembered.

Degustation really isn't a restaurant in the common sense in that all 16 seats sit around a bar with the cook and kitchen being the center of the show.

The night we were there I was happy to see the same chef from last time. Although he actually spent the night training someone else. A woman ended up cooking most of our food and it was just as wonderful.

Last time we had done the tasting menu so this time we just decided to order a bunch of dishes and split them between us.

We started out with one of my favorites from last time the Croquetas. 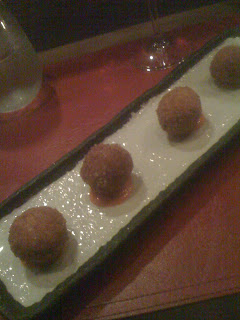 The next dish was my favorite of the night the crudo of Hamachi. 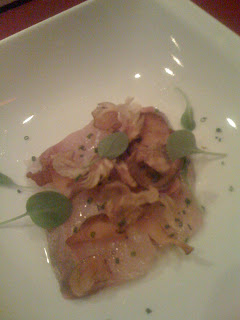 The hamachi was so fresh and texturally wonderful with crispy artichoke chips on top and the oil drizzled over the fish.

I thought this was a pretty big portion for the prices as well. There were about 5 big pieces of luscious strips. 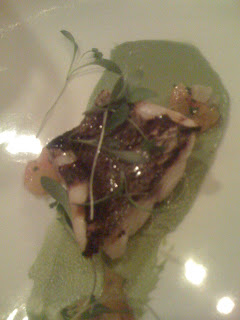 The next dish was the Snapper with avocado. The snapper was cooked fine but I thought it was way over seasoned. There was so much cilantro I couldn't tastes anything else.

If the Hamachi was my favorite dish, this came in a very close second. The grilled octopus. 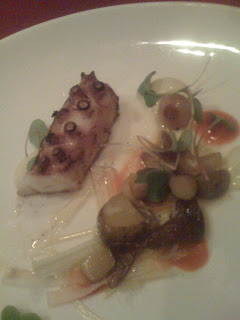 First of all, this octopus tentacle is huge and so meaty.

To be honest I have only had grilled octopus a couple of times (usually a fried calamari fan) so I don't have much to compare it to, but this was awesome. It came with some octopus mayonnaise that really brought out the flavor of the dish.

This was not on the menu last time we were there and I really hope they keep it on. 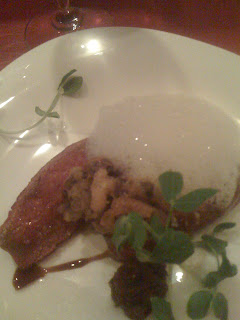 The last three dishes we got were the meat courses. First was the Wagyu Beef which came with some kind of weirds foam on top which I didn't care for but the beef itself was delicious.

The next dish was the Quail which I didn't get a shot of because it was so good we devoured it before I had a chance.

When we came here for the first time this was the first Quail dish I ever loved. Since then I have ordered Quail almost every opportunity I have. This was a wonderful reminder of why how Degustation really changed the way I think about some foods.

It came with some wonderful mushrooms and pine nuts which really brought out the flavor once again.

Our last dish of the night was the Lamb. 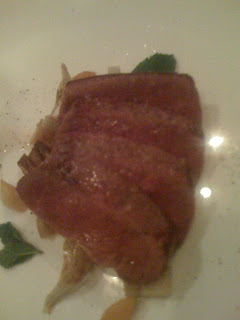 I am honestly not sure what I thought of the Lamb dish.

It was good but.. it reminded me of sausage?! Does that sound weird?

Mr T loved it...I thought it was maybe a tad too salty. I love a rack of lamb the best and when I have it any other way it always disappoints a little. It was still pretty good though.

Overall- the meal was fantastic. Every dish was good to spectacular, the wine was wonderful, atmosphere romantic and the bill was actually reasonable!! They could charge so much more!!

Let's cross our fingers that they don't because it;s one of the best deals in the city.

We ended up heading to Cha'an for dessert and finished the night with my favorite dessert the Black Sesame Creme Brulee.

Yay!! A successful night of eating. Two great small places that fall under the media rader but soar high above much of the hype.

Places like these remind why I love being a New Yorker.
Cha-an Tea House Degustation