May 05, 2008
For some reason I really seem to be hitting the German spots hard these days. We were meeting Mr. T's sister and brother-in-law for dinner Thursday night and she suggested Hallo Berlin. We got there right about 6:00 and took the last outdoor table. We were all having trouble deciding what to order so we went with the Sausage sampler platter. 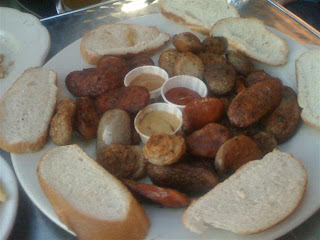 Look at all those sausages!!! My arteries are clogging up just thinking about them!

I was surprised to see that they came all cut like this but it ended up being better for sharing. 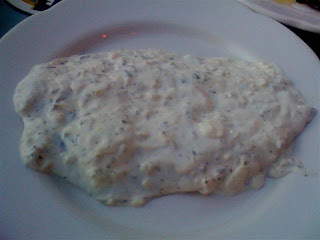 We also got some herring which was actually really good. I grew up in a Polish household so my herring consumption was quite large. This was very good for herring. Much better than I could have imagined. 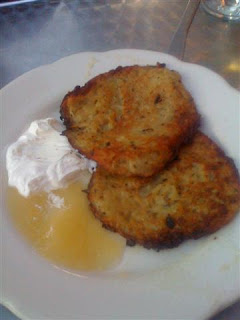 The potato pancakes were kind of meh...No where near as good as Zum's and really a little mushy. 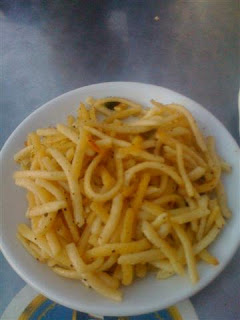 The fries were just like the pancakes- a little too soft and lacking an overall crunch.

If I'm going to injest this many calories I want to hear the fried crispiness! 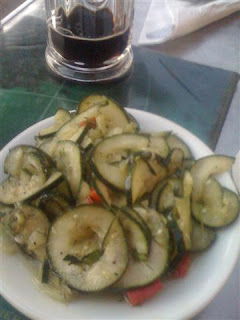 The cucumber salad was actually pretty bad. It was really soft and watery.

So overall Hallo Berlin is probably my least favorite German place in the city. The food obviously wasn't that great and the night we were there they were out of the first 3 beers we tried to order!

Also of the 6 times we've been there the service has been almost non-existent. We would have to get up from our seats to go and get our own beer.

Once we ordered food a nice waitress began to bring us stuff but it was obvious she was entirely too busy to really be attentive to the outdoor tables.

Hallo Berlin is a fun place but I would take Loreley or Zum any day.
Hallo Berlin