October 24, 2018
Usually on European vacations I'm obsessed with getting Steak Tartare in every form possible. Which was still true on this trip, it just took a serious back seat to Mr. T's vacation duck obsession. 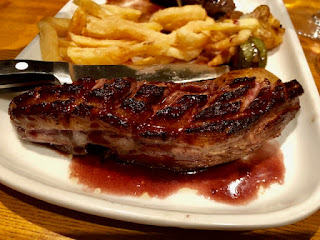 Duck Confit to be exact but since that dish isn't available in most restaurants other forms of duck would  have to suffice.  Mr. T had already enjoyed a classic Duck Breast at Gordon Ramsey the day before but now we moved onto to Brasserie Bordelaise; a bustling spot right in the heart of the city. 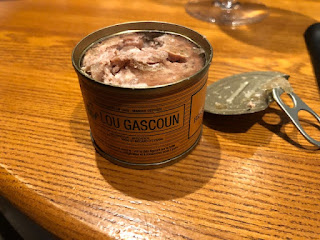 When the meal begins with a complimentary tin of pate you just know the meal is going to be something special. 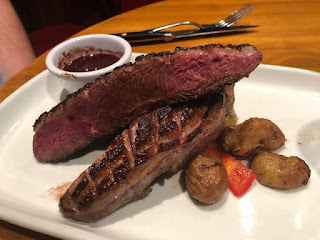 The Duck Breast arrived perfectly scored on the top with their signature red wine bordelaise sauce for drizzling.  This was rich and juicy with just enough fat to melt into the meat and make it incredibly tender. 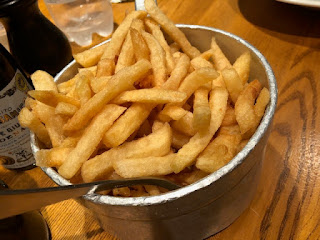 It was served alongside a huge bowl of frites that was more than ample for the entire table.  I was still full from our big lunch at Le Saint Julien so I ordered what I thought would be a small salad.  But what arrived was one of the largest plates of lettuce I've ever seen, stuffed full of chicken, cucumbers, radish and tomatoes. 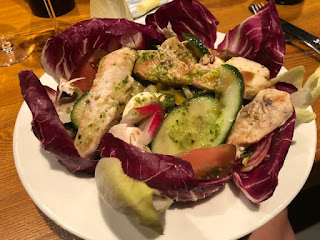 The salad was so large I ended up asking to take it away and when we arrived back at the flat I found two extra pate tins inside along with my meal.  I have never been given a tin of pate for any occasion but I took it as a very early birthday gift from Bordeaux.