October 12, 2007
I love Top Chef. Let me say that again I Looove Top Chef!!! It is one of my favorite shows in the whole world. Which makes it odd that we have never gone to any of the Craft restaurants even though most of them are in my neighborhood and Tom Colicchio started all of them.


So the other day I was heading home and walked past 'Wichcraft. I decided today was the day to try out some Tom cooking.


I grabbed the menu and immediately decided on a fantastic sounding roast beef sandwich. As I approached the counter and ordered I was informed that the sandwich was actually no longer on the menu. Needles to say I was a little sad but I quickly changed my order to the slow roasted pork sandwich with coppa, pickled pepper relish & fontina on grilled country bread. 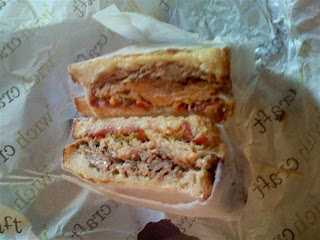 The sandwich itself was pretty good. Everything was obviously very fresh and the melted cheese and pork went really well together. Unfortunately the pickled relish was way too spicy for me. It was covered in red pepper flakes and consumed the whole sandwich.


The bread was great so next time I would order it sans the relish and see if that made it better.


Unfortunately I have to say the waitstaff at 'Wichcraft left much to be desired. They were quite slow and unfriendly. Not the type of service I would have expected.


Anyway, later that night after some shopping Mr. Trekker and I decided to stop for a glass of wine on the way home. Since we were right near Craftbar we decided to go there. Two Crafts in one day would be a feat!!


The space itself is sleek and stylish. We saddled up to the bar and ordered some wine. I went for a glass of the Roger Champault Sancerre Blanc Perris 2006. 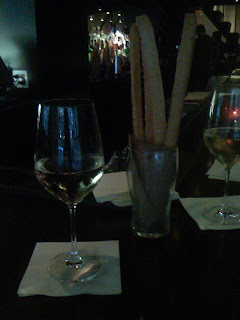 It was so dark in the place it was hard to get a good picture but WOW. This wine was awesome. One of the best wines I have had in a while. It was light and crisp with a hint of peach on the end. I was so impressed with this wine that I looked it up and ordered a bottle when I got home.

In the back of the picture you can see the huge breadsticks they gave us. I am not a big bread fan but these were good. A nice thing to crunch on that didn't interfere with the taste of the wine.

The service was great and we both decided we would have to go back another time try the food. I'm glad we checked it out, next on my list Craftsteak!!! I have to save up some money for that though!