March 14, 2018
To celebrate our wedding anniversary we picked The Grill this year; the old Four Seasons spot located inside the iconic Seagram's Building.  The lounge looks very similar to what it used to with a square shaped bar, big windows overlooking 52nd Street and Richard Lippold's gorgeous but slightly terrifying wire sculpture hanging from center ceiling. 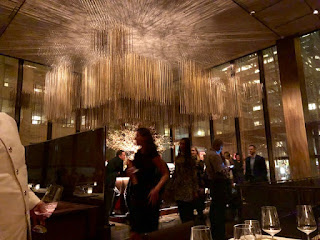 It was quite full with the after work crowd so when Mr. T was announced by the hostess (yes they do this type of thing here) we decided to head to the table for an apertif instead. 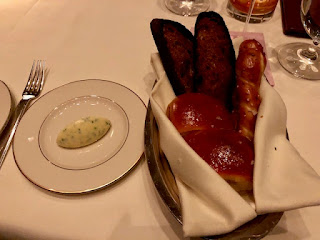 Bread Service- grilled Sourdough, Parker House Roll & Pretzel Stick with herb butter.  I'm a little obsessed with great butter and this was definitely up there in flavor; smooth and creamy with a nice balance of chive and garlic. 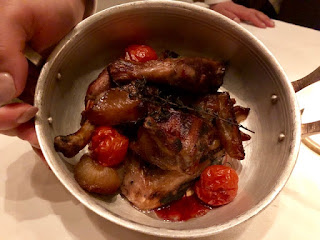 The Pasta a la Presse~ a dish unknown to both of us before this dinner.  The server brings over a bowl of pheasant, duck and chicken to show the table.  It's then placed inside a big silver duck press; something from the 19th century used to squeeze all of the blood out of a duck carcass.  The meat and herbs are then pressed all together until a vibrant red sauce is released.  This is then poured over ribbons of egg noodles with a flurry of cheese shaved on top. 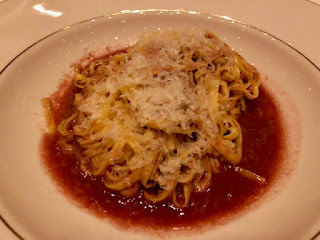 Wow- this dish had so many flavors going on it's almost impossible to describe but smokey and rich with a depth of layers that just never ended.  The smokiness was a bit too intense for my tastes but Mr. T absolutely loved it. 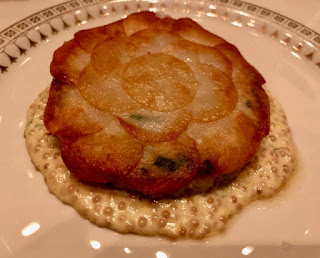 Seagram Crab Cake~ lump crab meat bound together by a crispy layer of flowering roasted potatoes.  This was phenomenal, just pure lump crab meat (nary a bread crumb in sight) complemented by creamy mustard aioli.  I happily devoured this entire dish while Mr. T was focused on the pasta :) 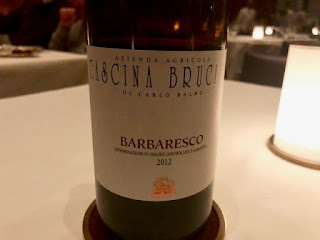 After cocktails we moved onto wine with a lovely 2012 Barbaresco. 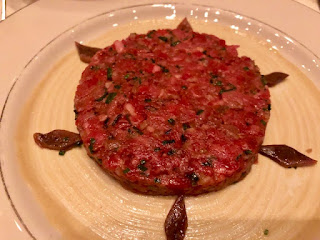 Then it was onto entrees; the Steak Tartare for me tossed with anchovy, egg and chilies which gave a lingering spicy finish to each bite. This was actually listed under appetizers but certainly more than ample for a main course. 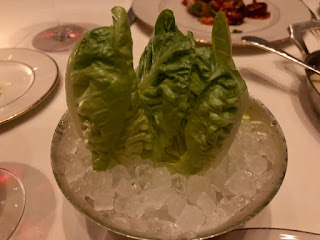 It arrived with a small bowl of ridiculously cute iced lettuce spears that were the perfect vessel for the meat. 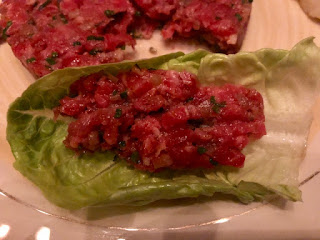 The tartare was so big I only got through about half of it before fullness began to take over.  Of course that may also be due to my multiple bites of Mr. T's Neptune's Crown Dover Sole. 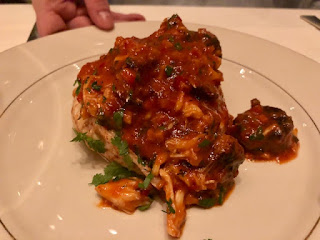 This wonderfully sweet, flaky fish was filleted table-side then dressed with grilled shrimp and blue crab meat in a buttery tomato sauce that was absolutely heavenly. 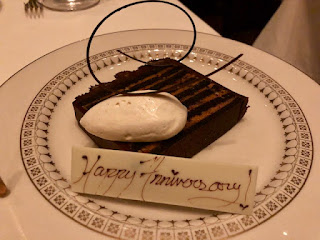 For dessert a thick slice of Chocolate Praline Cake... 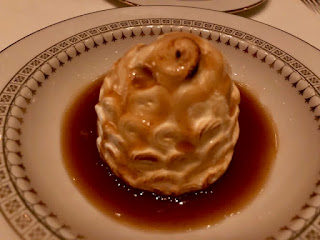 ...and a flaming Baked Alaska made with banana ice cream, bourbon caramel sauce and toasted meringue.  Easily the best dessert I've had so far this year and the perfect way to close out a celebratory meal.

The Grill was spectacular from the food, to ambiance and service; which while certainly formal and professional never once felt stuffy or overbearing.  Prices are expensive but not unreasonable when compared to other steakhouses in the area where there is a significant lower quality in both food and service.  This restaurant deserves all the praise it had been given and I can't wait to dine there again.