September 03, 2007
Mr T & I stumbled across this sushi place a little over a year ago and had a fantastic meal kind of on a whim. We were in the area with his sister and brother-in-law this week and decided to check back and see if our second meal would live up to the first one.

When I got the menu I quickly noticed that the $50 tasting menu we had the first time had now raised in price to $55. This is not uncommon, especially since this place was relativity new when we first but I was a little surprised. Nonetheless, we all ordered it because I remember thinking we had gotten a great deal last time.

Our waiter came over to get our drink menu and we ended up getting into quite a discussion with him about good beers to have with our meal. Being into beer as much as I am it was nice to have a waiter who understood that beer can match a dish just as well, if not better, than wine.

We got our drinks and waited only about 5 minutes before our first dishes started to come out.


The first course was a trio of mini appetizers. 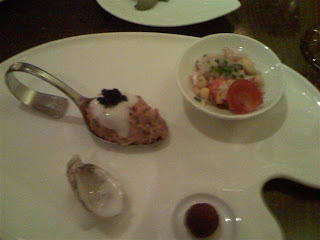 The first was an oyster that had an incredible ponzu jello sauce on top. I have never been a big fan of oysters but this one may have changed my view on the little suckers. It was really incredible. I only wish I had gotten my camera out before I gobbled it up- oops!

The second was tuna tartar topped with a soy foam and caviar. This was alright but I'm honestly kind of sick of the whole tuna tartar thing. I feel like this item has been played out in every Japanese place.

The third was a fantastic corn and crab salad that was perfectly refreshing dish for such a steamy summer night. 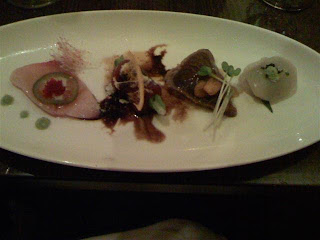 The new style sashimi is one of the reasons I love this place so much. It's pieces of sashimi that each have a different sauce to complement the fish. My favorite was the yellowtail with jalapeno and barbecue sauce.

The third course was a hot entree from the kitchen. 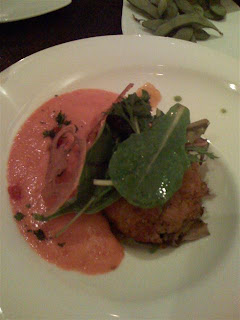 This was an Alaskan King crab cake. This actually sounded a lot better than it actually tasted. The dish was good but I think the great flavor of the King Crab was masked by the bread crumbs and spices. The last time our hot entree was their Rock Shrimp Tempura which I thought was better than Nobu's, so I was a little disappointed in this dish.

The fourth course was the sushi platter with miso soup. 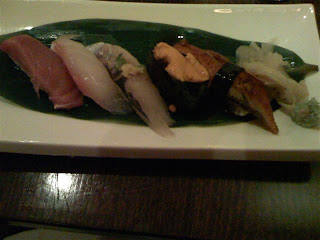 The sushi was all very fresh and it was nice to see some different pieces of fish that you don't always see on a sushi platter such as the Uni and Unagi. Mr. T's brother-in-law is a huge Uni fan and ended up eating everyone's at the table!

At the end of the meal you are offered a scoop of vanilla or chocolate Alphabet City ice cream topped with fresh strawberries.

For $55 we all agreed this is still one of the best deals in the city. The fish is fresh and interesting, the space is cool and it just has a nice neighborhood vibe about it.

On the way out the bartender even gave us a name of a couple new bars in the area that recently opened where we could score some good beers. All around just a great dinner. If you're in the area I highly recommend checking this place out.