February 10, 2012
I was craving a burger the other day and didn’t just want any old thing.  I was feeling a more gourmet style burger- hefty with a great cheese on top and a nice atmosphere to eat it in.   Obviously Gramercy Tavern came to mind first but since I’ve eaten there so much lately I decided to try out USC’s. 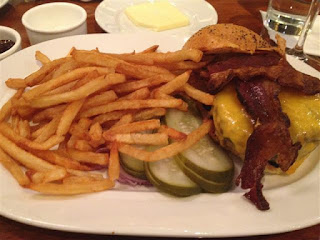 I guess I shouldn’t have assumed the two would be similar just because they’re owned by the same group.  USC’s was immediately different just by looking at the big thick strips of bacon on top and oozing orange cheddar.  This burger was certainly hefty but I wouldn’t call it gourmet. 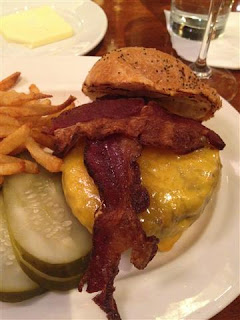 While it tasted good- the meat had more grease than I was expecting.  The smokiness of the bacon overpowered the sandwich as well and I ended up taking most of it off so I could taste more of the burger.  This was by no means a bad burger just totally different than I was expecting. 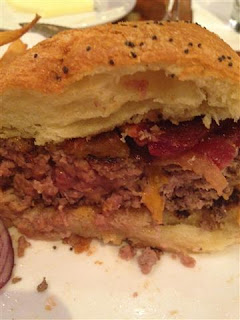 The pile of fries that came alongside were tasty but could have been a bit more consistent.  Some were crispy bites of perfection while others were oily and limp.   In the end I was most definitely looking for a Tavern burger and came out a bit disappointed.  Luckily the atmosphere happened to be exactly what I was looking for so at least it satisfied that for me.